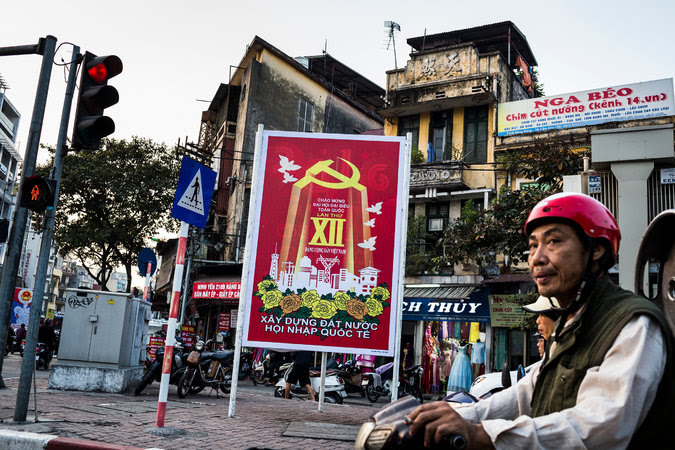 A banner in Hanoi, Vietnam, for the party congress set to begin Wednesday. Credit Aaron Joel Santos for The New York Times
HANOI, Vietnam — Soon after becoming the American ambassador to Vietnam in 2007, Michael W. Michalak approached Nguyen Tan Dung, the country’s new prime minister, at a gala dinner and mentioned that human rights were among the American government’s highest priorities in Vietnam.
“You could see his face just freeze,” Mr. Michalak, now the senior vice president of the U.S.-Asean Business Council, recalled with a chuckle. Mr. Michalak quickly told Mr. Dung that he wanted to toast his health and make a friendly suggestion: The caterers should serve American beef at the next such diplomatic event.
“He just cracked up, and we started drinking vodka,” Mr. Michalak said. “And ever since then, at every one of these dinners, he always would make sure to have a shot of vodka with me.”
On Wednesday, Vietnam’s ruling Communist Party is to convene its national congress, which meets every five years to select the country’s top leaders. And Mr. Dung, a charismatic prime minister who favors closer ties with the United States, is battling to succeed Nguyen Phu Trong, a conservative apparatchik looking to stay on in the party’s top job of general secretary, according to several analysts, diplomats and business leaders. 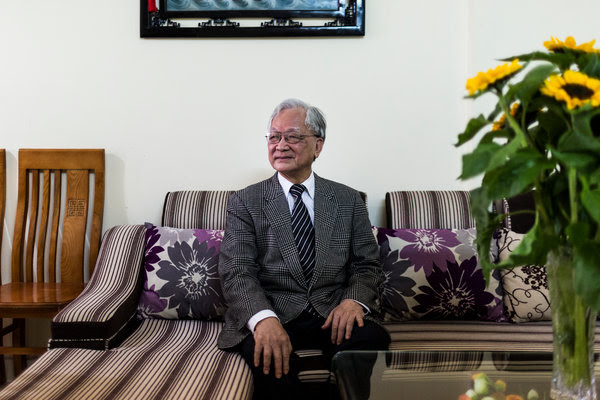 Bui Kien Thanh, an American-educated businessman who has advised Nguyen Tan Dung and other Vietnamese prime ministers on economic policy. Credit Aaron Joel Santos for The New York Times
The outcome of these congresses is usually settled months in advance, but a protracted spat between factions loyal to Mr. Dung and Mr. Trong has resulted in last-minute maneuvering. Whoever comes out on top could determine the future of Vietnam’s carefully calibrated strategic balance between China, its ideological ally and main trading partner, and the United States, which the party elite increasingly considers an important counterweight against growing Chinese influence in the region.
Mr. Dung, who is finishing his second term as prime minister, won praise among Vietnamese for denouncing China’s decision to move an oil rig into disputed waters near Vietnam’s coast in May 2014, and he is considered a champion of market-oriented policies who has developed warm personal relationships with top American officials.
By contrast, Mr. Trong, the party’s general secretary since 2011, appeared reluctant to criticize China in the oil rig dispute, and he is seen as a more forceful proponent of the state’s role in the economy and defender of the party’s monopoly on power. But he also steered Vietnam into the Trans-Pacific Partnership, an American-led trade agreement among a dozen Pacific Rim nations that excludes China.
“If the conservative faction emerges the winner at this party congress, the U.S. may find that it would need to do even more trust-building with Hanoi” than it has done lately, said Phuong Nguyen, an associate fellow at the Center for Strategic and International Studies in Washington.
“Trade and investment ties are expected to still forge ahead if the T.P.P. is ratified,” she said, but she predicted that it would be more difficult for Washington to expand military ties with Vietnam if Mr. Trong’s faction were to prevail.
At 66, Mr. Dung is five years younger than Mr. Trong. But according to a longstanding rule, the age limit for a member of the Politburo to start a new term is 65. The leadership can grant an exception, however, and Mr. Dung has been angling for one so he can succeed Mr. Trong as the party’s general secretary, several Vietnamese political observers have said in recent months.
That prospect, once considered almost inevitable, has come to seem less likely in recent days as Mr. Trong and his supporters have sought to force Mr. Dung into retirement, analysts said. The apparent turnaround has caused concern among Vietnam’s urban intellectuals, many of whom view Mr. Dung as the best hope for further integration into the global economy and curbing Chinese influence in the region.
“Dung doesn’t have many allies in the Politburo, and it’s very hard for him to change the status quo, so we are worrying,” said a Vietnamese academic at a state-affiliated institution, who spoke on the condition of anonymity to discuss a sensitive political matter.
While Mr. Trong’s supporters are said to have the upper hand in the elite, 16-member Politburo, they are worried that Mr. Dung, an unusually dynamic prime minister, has undercut the party leadership by strengthening government institutions and building a vast patronage network among provincial party bosses and in the 175-member Central Committee.
One chain of events that has been discussed in recent days is that the party’s top four leaders, including Mr. Dung and Mr. Trong, will retire and cede power to a younger crop of Politburo members, apparently in a victory for Mr. Trong’s camp. Some analysts said Mr. Trong may even remain in his post for another year or two to keep a lid on tensions inside the party elite.
It is not entirely clear how the leadership shuffle will affect Vietnam’s warming relationship with the United States, or its efforts to assert its economic independence and sovereignty over parts of the South China Sea without angering China.
In May 2014, the Chinese oil rig episode set off street protests in some cities that were initially tolerated — some said encouraged — by the government, and then riots at industrial parks in central and southern provinces. Mr. Dung, unlike other party leaders, responded to the Chinese move with denunciations of Beijing’s territorial ambitions that appealed to Vietnamese patriotism.
Relations between the Communist neighbors have since recovered somewhat, and Mr. Dung shook hands with President Xi Jinping of China when he visited Hanoi in November. But many Vietnamese object to China’s island-building projects in disputed waters, viewing them as reminders of Chinese imperial conquests of Vietnam. They also resent China’s economic influence here, in the form of growing trade, tourism and infrastructure projects.
At the beginning of January, Vietnam formally accused China of violating its sovereignty, as well as a recent confidence-building pact, after Beijing landed a plane on one of the artificial islands built by the Chinese. 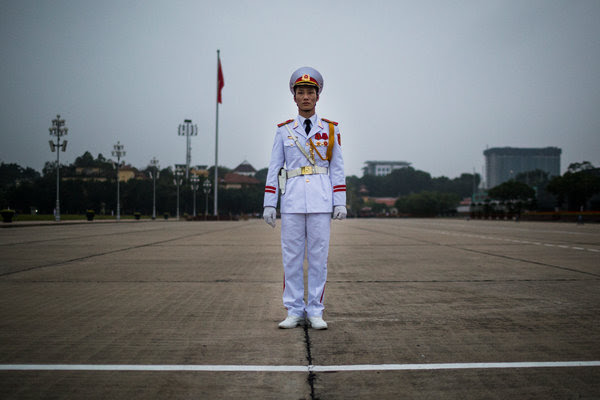 A soldier standing guard at the Ho Chi Minh Mausoleum, across the street from Parliament in Hanoi. Credit Aaron Joel Santos for The New York Times
Mr. Dung’s economic record has been marred by scandals at state-owned enterprises and a bout of debilitating inflation. Yet he is still widely seen as the party’s strongest proponent of opening the Vietnamese economy to more foreign investment and competition, and of Vietnam’s membership in the T.P.P.
“Until now, none of our leaders did much to internationalize Vietnam, but Dung is different — he stands out,” said Nguyen Viet Ha, who runs a chemical-trading company in Hanoi. “Before, we depended on China a bit more, and now we’re a bit more independent and have access to Western technology.”
Bui Kien Thanh, an American-educated businessman who has advised Mr. Dung and other prime ministers on economic policy, acknowledged that such policies had left Mr. Dung open to criticism. “A lot of people say Nguyen Tan Dung is an American ally and so on, but that is only talk,” he said. “Nguyen Tan Dung sees very well that economic opening cannot go without good relations with the U.S.”
Other analysts and business leaders said relations with the United States would remain on an upward swing even if Mr. Dung were forced to retire. Mr. Trong’s visit to the White House in July — the first by a Vietnamese Communist Party boss — was a clear sign of a growing consensus across party factions that better relations with the United States is in Vietnam’s national interest, they said.
Mr. Michalak, the former American ambassador, said Vietnam’s relationship with China had “dropped down a few degrees” since the oil rig dispute. “I don’t think that’s going to change anytime soon no matter what government gets in” at the congress, he added.
The United States, meanwhile, eased a longstanding ban on the sale of lethal arms to the country in October 2014, saying there have been incremental improvements in Vietnam’s human rights record.
But human rights activists have pushed back against that narrative, and many said they expect no improvement in civil liberties as a result of the leadership transition.
Le Cong Dinh, a prominent human rights lawyer now under house arrest in Ho Chi Minh City, said in a New Year’s Eve message on Facebook to his supporters that he was “totally indifferent” to the outcome of the nine-day party congress. “They haven’t proven what they’ve done or will do for our nation, aside from running back and forth for the sake of their and their comrades’ ‘chairs’ and ‘rice pots,’ ” he wrote, using slang for jobs and income.
Người đăng: nguoibuongio1972 vào lúc 23:36